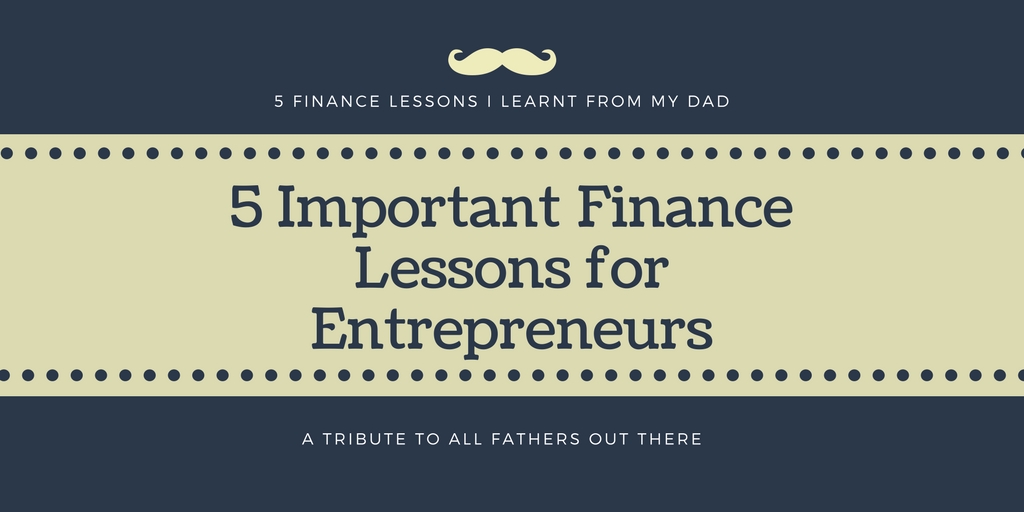 It’s that time of the year where people flood your social media news-feed with selfies, old pictures, and hashtags dedicated to their dads. Several of these posts which praise a father publicly tend to instill a sense of pride, love and other intense emotions in us.

While I’m one of those social media enthusiasts who post statuses with hashtags “daddy’s girl,” “dad’s my hero,” etc.. sharing how supportive, compassionate, and joyful my dad is. This year, I wanted to do something different to honor all the dads out there on father’s day.

Instead of just stating how awesome he is, I wanted to share the little tidbits of financial lessons he tried to drill into my brain.

Being a financier himself, he had a lotta advice to offer when it comes to money and personal finance. As a teenager, I used to turn a deaf ear whenever the conversation steers towards finance.

But that was just until I became an Adult and realized how useful those little pieces of bits of advice were.

Now that I’ve accepted it, without further ado let me get on with pondering over 5 universal money lessons he taught me which could come in handy for any aspiring entrepreneur

1. Keep track of your cash flow

Fathers always emphasize quite a bit on the importance of maintaining a stable budget and sticking to it. I’ve seen him sit around the coffee table at the end of every month with a bundle of bills, calculating the expenses, trying to tally everything.

My dad reckons that making it a habit to check all the statements and expenses carefully offers a complete control over our spending pattern.

You may claim that “I never had a budget for personal funds, but I survived.” Just because you glazed through it doesn’t mean your business would sustain it. It is vital to keep track of the cash flow, what generates revenue for your firm and how it is spent.

If you don’t maintain a record of it, how would you deduce the financial condition of your business? Hiring an accountant and starting to track the cash flow would give you an insight on when to rein in and rethink your strategies if required.

2. Don’t cross the line of budget

Dad has tried time and again to make me live within my means. Even as I write this, it is quite funny. From my third standard, dad started giving me an allowance, something like a weekly pocket money that I could spend on things I want.

There were no rules on how I should spend it, except the fact that if I end up spending it all in one go, I’ll have to wait until the end of week to replenish my stash. Being a sweet-toothed foodie, I used to spend the first few allowances on candies in a single day and would be whining around for the rest of the week.

But, dad never gave in to my whines, he even became immune to my puppy eyes when it was a money matter. I used to hate him for being so rigid, but when I started earning and took care of my own finances, I knew what an invaluable lesson it was.

That’s a cute memory, but how is it relevant to entrepreneurs? An entrepreneur’s vision is superior. However, their vision could sometimes make them over ambitious. The field of entrepreneurship is quite unpredictable so overspending your capital or making financial decisions based on your future incomes.

The strategy of “Go big or Go home” may seem appealing and even work for a while, when you have a large stash of capital. But, contrary to your belief, your pocket isn’t Tartarus, the bottomless pit. So stretching your working capital to a thin line by spending an extravagant amount of money may shake the foundations of your fledgling business.

3. Don’t fall into the debt trap

While the option of paying installments may seem like a relief to use, my dad believes it could cause us to splurge a lot more than we initially intended to.

Even today, when he wants to invest a considerable amount of money on appliances or gadgets, he would never opt for EMI in his words he would like to steer clear of debt.

He is a firm believer of the philosophy, “The less we spend/owe, the more you earn.” The stress of debts would only add to the pre-existing chaos in an entrepreneur’s life. While you are busy building your empire by investing all your resources for its benefit, you might be accumulating a deep pool of debt.

So, before resorting to an old fashioned loan and subjecting yourself to the collateral headaches, try looking for other options, such as crowdfunding, accelerators or incubators before dipping into the debt pool.

Was my dad the perfect frugal financier? Hell, No! He often insists that frugality isn’t the right way to achieve financial success and that being frugal doesn’t necessarily mean that you are spending wisely.

So, when you want to invest in something and save money at the same time, give importance to its quality instead of going for the cheapest available option.

When you are working on a tight budget, you may end up cutting down some of your vital expenses, and that is never a good idea. Streamlining your cash flow is necessary. However, there are certain areas where you could not afford to slash like marketing, IT expenditures, and human resources.

While you may be tempted to cut down a part of your marketing expense, it could stunt the growth of your company. If it is a tight squeeze, choose a low-cost option, whenever possible hire an expert to take care of your marketing area.

Though skipping a few IT upgrades and quintessential softwares may be rather tempting, slashing your IT budget could result in long-term consequences. If you could not invest in an enterprise solution, then go for a SaaS product to get the same result rather than compromising on the quality of your software with a considerably cheap on-premise app.

Paying an accountant to maintain your records may seem like a frivolous option, but skipping it to cut down your expense may be counterintuitive to your ambitions.

So, before you decide on trimming down an expense, tread carefully, analyze the long-term consequences before you make up your mind.

5. Always save for a rainy day

I’m sure at least some of you remember the tale of “Grasshopper and Ant.” The story where ant saved arduously for a rainy day and reaped the benefits where as the grasshopper hopped about lazily without much thought about future and died of hunger?

Dad is a fervent believer of that tale and is always adamant in being prepared for the worst case scenario. This piece of advice may sound rather pessimistic, but when you are ready to face the worst, you could definitely handle anything life throws at you.

It might seem unreal and hard to believe, but being an entrepreneur doesn’t make you invincible. Hearing horror stories about the journey of entrepreneurship and thinking that it would not happen to you might be the optimistic way of approach but knowing that nothing is stable and change is the only constant would help you sail through the irregular income.

Thinking ahead, keeping a backup plan in place to use when things financially fall apart would help you come out of a crisis with flying colors.

That concludes the list of financial lessons my dad tried to instill in me. On this occasion, I would like to thank my dad for imparting these valuable lessons and playing a profound role in shaping my financial habits for years to come.

I hope this blog post was at least a tad bit useful to aspiring entrepreneurs out there and wish some part of the write up reminded you of those precious moments that you spent with your father.

Habile Technologies brews innovation and offers the perfect mix of technology, competitive business edge and strategy. With a proven track record of happy clients, we are proudly the best technology partner for your organisation.

how can we help you?

Tell us about your requirement and we’ll offer you the best possible solution. Get in touch now.