HomeBlogFintechWhat Do Prominent P2P Players Think Of The RBI Regulations?

What Do Prominent P2P Players Think Of The RBI Regulations? 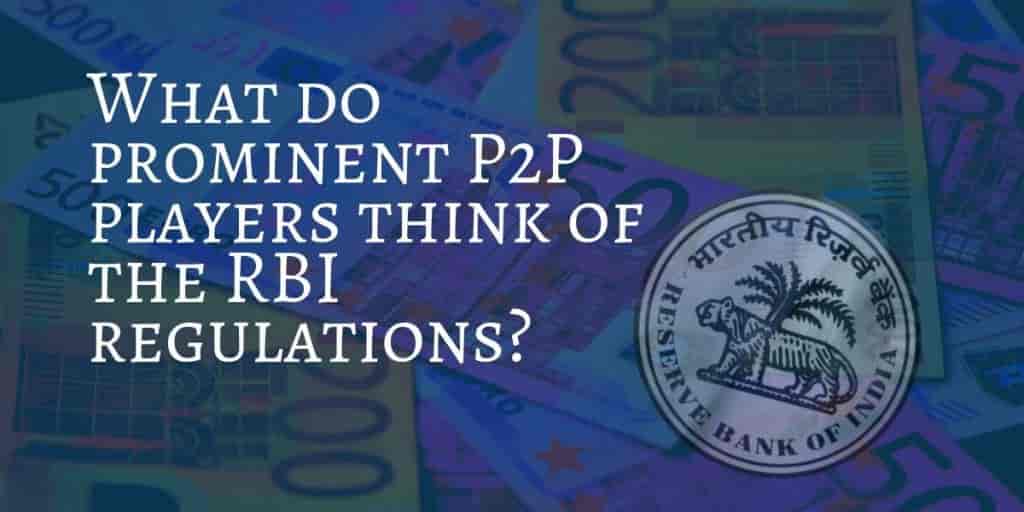 Following the US and UK models, RBI is all set to jump on the bandwagon of regulating the P2P space with strict guidelines. The norms being finalised are expected to release in a few weeks, how are the peer-to-peer (P2P) lending platforms faring?  What is their stance on this? Will the stringent norms curb the innovation?

Instead of speculating we thought why not ask them directly? So, we went ahead and contacted all the major puppeteers in this realm who were glad to shed some light on this issue without an ounce of hesitation. Here’s what the prominent players in the P2P landscape of India had to say about the regulation.

But, before we get on to that, let’s take a quick look at the P2P market of India.

If you are interested in the P2P sector, you may also like: Is P2P lending really a threat to NBFCs?

P2P lending emerged in India around 2012 with i-Lend launching the first social lending platform. The nascent market has picked up the pace in the recent years. Peer-to-Peer lending platforms in India disbursed around $2 Million worth of loans during the period 2013-2015.

It is true that P2P lending is still at its nascent stage and the lack of regulation is hindering its boom. But the reports of KPMG and NASSCOM seem to hold a promise of the potential hidden in this new asset class with a prophecy that the industry would cross $2.4 Billion by 2020.

Once the issue of regulation is settled, and a sense of much-needed awareness is instilled amongst the masses, the sector is expected to hit a growth spurt which would make the industry to flourish and pass the line of $4-5 Billion by 2023.

As per Tracxn’s latest report, the Indian P2P arena has around 63 players like Faircent, i2ifunding, i-Lend, Lendbox, LenDenClub, Monexo, etc… In order to stimulate the growth of the industry, the p2p players are seeking to create a rather diverse borrower base and break out of the image that the industry seems appealing to only those in the younger generation.

The demonetization drive was one of the primary contributing factors for the surge in the P2P activity last year. While monumental reform spearheaded by the Indian Government came as a huge blow to the lending sector, P2P lending seems to have benefited most from it. With banks getting more acrimonious to disburse funds and cutting down the deposit rates consumers started to look for an alternative way to acquire resources.

This temporary cash crunch also forced SMEs and MSMEs to look for different channels of financing. It is said that they were the biggest beneficiary of this new phenomenon. In 2016, almost 34% of the borrowers were entrepreneurs who used P2P to replenish their virtual shortfall of cash and expand further.

P2P has secured a niche for itself in the lending market with it myriad of advantages like hassle-free application process, quick loan processing, lower interest rates for borrowers when compared to credit cards and high returns for lenders. From a lack of awareness among the masses to finding creditworthy borrowers, P2P has plenty of obstacles to overcome.

When I got in touch with the prominent players in the industry with a question, “what is the biggest challenge you face?” I got a unanimous answer which was rather surprising.

They all agreed on the fact that the biggest challenge has been to create awareness about this new Fintech opportunity amongst the borrowers and lenders. While attracting borrowers seem to be comparatively easy, the lack of trust amongst the investors rather hard to tackle.

Getting access to the credit information of borrowers and reporting defaulters to credit bureau still remains to be a hassle. The NACH Debit process which was launched to promote digitization seems like an equally cumbersome procedure with the mandatory wet signature requirement.

In addition to all these dilemmas, the unregulated nature of the sector remains to be a dark area of the P2P landscape. As RBI is all set to roll out the norms shortly, what do the top players in the industry think of it? Let’s see a brief outlook of the P2P market, the common challenges they face, and their view on RBI P2P regulations.

Bhavin Patel, Co-Founder of LenDenClub feels that the RBI lending guidelines would help P2P sites cater to a much larger borrower segment called MISSING MIDDLE, which has been ignored so far and he believes it would offer a healthy dose of much-needed confidence to not only P2P sites, but to individual lenders as well.

Ekmmeet Singh, CEO of Lendbox states that there has been a spike in the institutional investors since RBI rolled out a draft of regulations for the P2P Sector. As P2P is a new asset class, he feels P2P sector would take some time to pick up the pace and he firmly believes that the RBI norms would act as a growth catalyst resulting in a surge of interest amongst the borrowers and lenders.

Shankar Vaddadi, Founder of i-Lend views the peer-to-peer RBI guidelines as a progressive piece which paves way for a trajectory of growth in institutional investments irrespective of few granular details.

Raghavendra Pratap Singh, Co-Founder of i2i Funding claims that the regulatory delays are a sense of distress among the investors. He states that the guidelines would enable rapid growth as the operational issues such as allowing the P2P agencies to report defaulters’ data to credit information bureaus.

You may also like: Most Popular Credit Rating Agencies in India

Rajat Gandhi, Founder & CEO of Faircent states that the guidelines devised by RBI appear to be progressive and seems to safeguard the interest of all parties involved without stifling the innovation. However, he believes that somewhere down the line, the guidelines would morph into regulations giving a major blow to the sector.

Vikas Mirmira, VP- Marketing at Cashkumar claims that the pending RBI regulation is the most challenging aspect. He strongly believes that the rules would instill a sense of trust amongst the masses, making them accept P2P as a legitimate source of lending and borrowings and also put a stopper to operational issues like credit reporting.

RBI Guidelines – A Boon or Bane?

Timmana Gouda, Founder & MD of Whatsloan on a Linkedin Conversation said, “We last out on the early boom, delaying regulation, like SEBI is doing with crowd funding, P2P majors in west and China are struggling with a huge drop in valuations, accounting frauds, and money laundering! Hope our P2P companies build on a solid base and self-regulate themselves.“

Madhusudan, CEO of KrazyBee stated, “P2P sector is too nascent to be regulated under the guidelines of NBFCs (as proposed by RBI in its consultation paper). Unless Fintechs are given a certain amount of independence to innovate and flourish, the P2P industry shall suffer under stringent norms of NBFCs.“

They have raised a valid concern. The overall opinion that Indian regulators don’t appear to keep up with the fast paced world seems justified and looks as though the government is jumping the bandwagon just to play catch up with rest of the world. The process of classifying them under NBFC rather than considering them as a nodal agency does look like an archaic practice.

So, what’s the verdict?

At the moment, regulation is the need of the hour for P2P lending sites. The delay in regulations is having an adverse effect on the funding opportunities and causing operational issues in the P2P sector, so it is high time, RBI rolled out the norms. But if the RBI ends up taking an out-dated approach with an attempt to show some progress just for the sake of it has high chances of ending up as a disaster.

The norms have to act as a growth catalyst for the sector and nip malpractice in the bud. However, the strict regulations should not limit innovation. Hope, the apex bank manages to find a balance between the conflicting properties of stringency and growth.

Just as Umbridge said in Harry Potter, “Progress for the sake of progress must be discouraged.  A balance between old and new has to be found. We could only hope that the new RBI regulations will enable the p2p sector to move forward into a new era of innovation with its supportive regulatory measures while preserving what must be preserved(the trust of investors and borrowers), perfecting what can be perfected(improve operational efficiency), and pruning practices that ought to be prohibited( prevent frauds and malpractices).”

You may also like: 20 Harry Potter Characters you should hire for your Startup

Do you want to Automate your complete loan cycle with the digitized software platform?